Whilst there are 164 different meals available in Disney Dreamlight Valley, it quickly becomes obvious that some of these meals can offer more than others when it comes to progressing in your game. You want meals that restore a hefty amount of Energy, require a low amount of ingredients or at least ingredients that are fairly easy to find, and sell for a bunch of Star Coins at one of Goofy’s stalls. Have no fear. We’ve put in the leg work to reveal the best recipes and meals in Disney Dreamlight Valley that can be cooked up.

Once you’ve figured out how to unlock cooking and get a stove, of course. When it comes to categorizing what makes the best meal, well, it’s important to focus on what we’ve already mentioned, whether the meal can fulfill just one of these requirements or more.

Whilst we’ve compiled the top best meals and recipes in Disney Dreamlight Valley below, we do want to add a note for those in the early game that is also looking for recipes that are easy to make. For these recipes, we’d highly recommend making:

Fruit is easy to come by from the very start of the game, growing around the first biomes of the Plaza and Peaceful Meadow.

Whilst they don’t sell for the best amount of Star Coins or restore a great amount of Energy, for the minimal effort they require, they’re worthy of a place in our guide.

Plus, if you’re looking to get Dreamlight fast, both the cooking and fishing Dreamlight tasks require you to cook and sell meals, as well as specifically cook fruit-based meals and fish-based meals to earn Dreamlight. So, they’re definitely easy ways to fulfill these goals too. 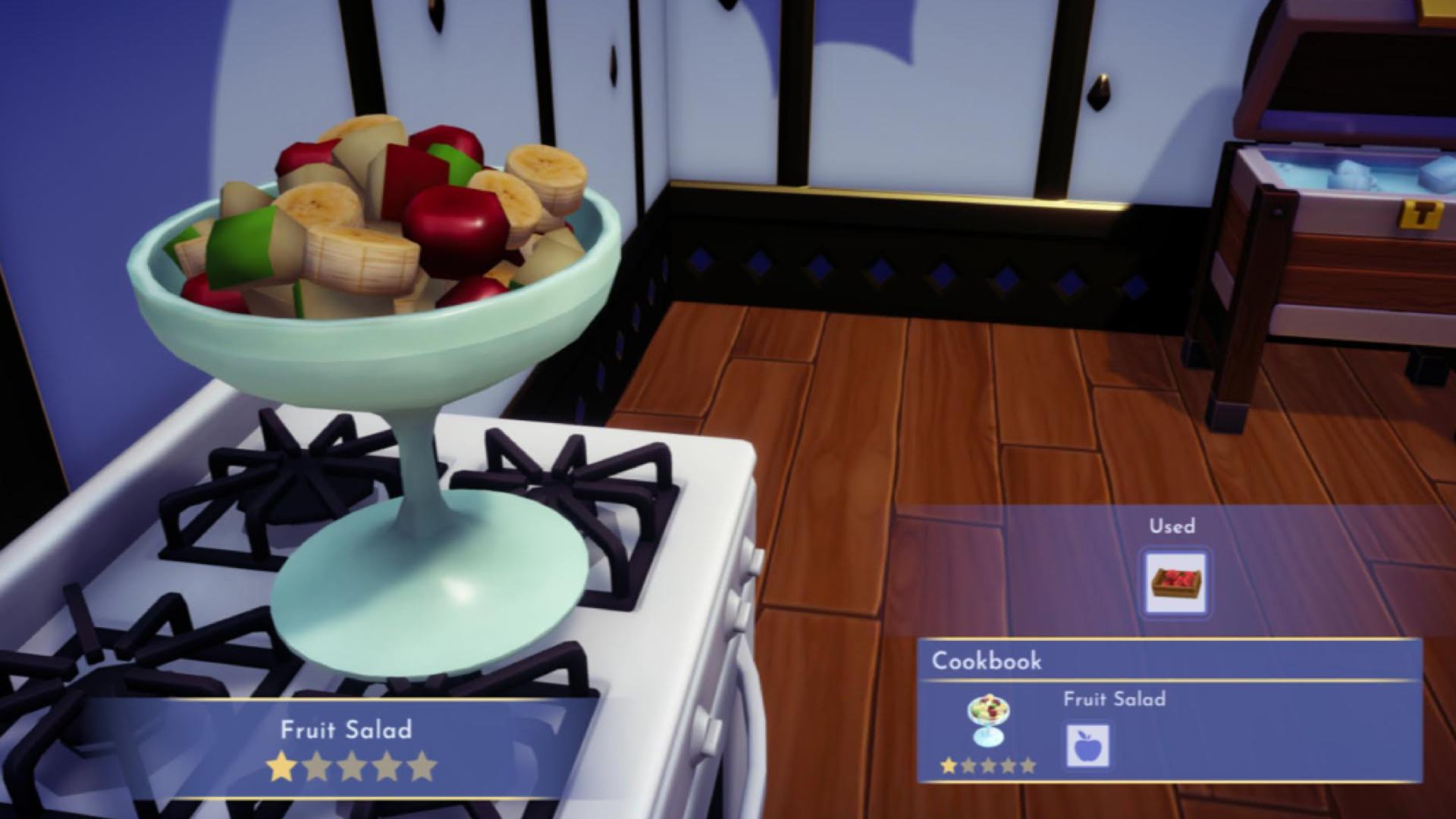 As mentioned, when it comes to cooking up the best meals in Disney Dreamlight Valley, your choice can be the best based on a variety of reasons. For our guide, we’ve focused on how easy they are to make, how many Star Coins they can be sold for, and how much Energy they restore when eaten.

Fugu is the rarest fish in the game and we’d recommend checking out our Disney Dreamlight Valley cooking guide to help on your mission to find them.

The Lancetfish is a fish that you won’t find until you’re later into the game as it can be found in the Forgotten Lands biome which requires 15,000 Dreamlight to unlock. That being said, once you do, it’s a great Star Coins and Energy meal.

When fish are hard to come by, we have a few recipes in our top ten list that lean more into Chez Remy’s wonderful pantry of ingredients. The Souffle, for instance, can all be gathered at Chez Remy with great Star Coins in return and some of the best Energy on offer.

Once you’ve unlocked the Glade of Trust and/or Sunlit Plateau biomes, you’ll have access to Cocoa Bean to make an energy-fuelled, reasonably priced meal with minimal ingredients.

Jazz up your simple wheat and milk porridge with any fruit and you’ve got yourself a quick and easy meal to support you with Energy as well as quickly make some Star Coins.

Swordfish is a great fish to find on Dazzle Beach and both Garlic and Lemon can be foraged quite easily from the Glade of Trust making this one fish meal that’s fairly simple to make.

Once you welcome Remy to your Village, he comes with a pantry of ingredients based inside Chez Remy making this recipe easy to make as well as great for both Star Coins and Energy.

A simple recipe for those looking to restore some extra Energy. Berry Salad is available to cook once you’ve unlocked either the Forgotten Lands or Frosted Heights as this is where Gooseberries can be bought and/or foraged.

Bouillabaisse is one of those recipes that you might just find yourself with the ingredients without realizing and yet, you can sell it for over 600 Star Coins and restore a bunch of Energy.

This five-star meal is one of the greatest Energy boosts in the Valley. Lobster can be found in the Glade of Trust and the other ingredients can be foraged or purchased from Chez Remy making them fairly easy to get hold of.

Finally, whilst you won’t unlock the Anglerfish until you open the Forgotten Lands, which is quite a late-game biome, once you do, you’ll reap the rewards. Almost 4000 in Energy and over 2000 Star Coins is a recipe that is hard to beat. 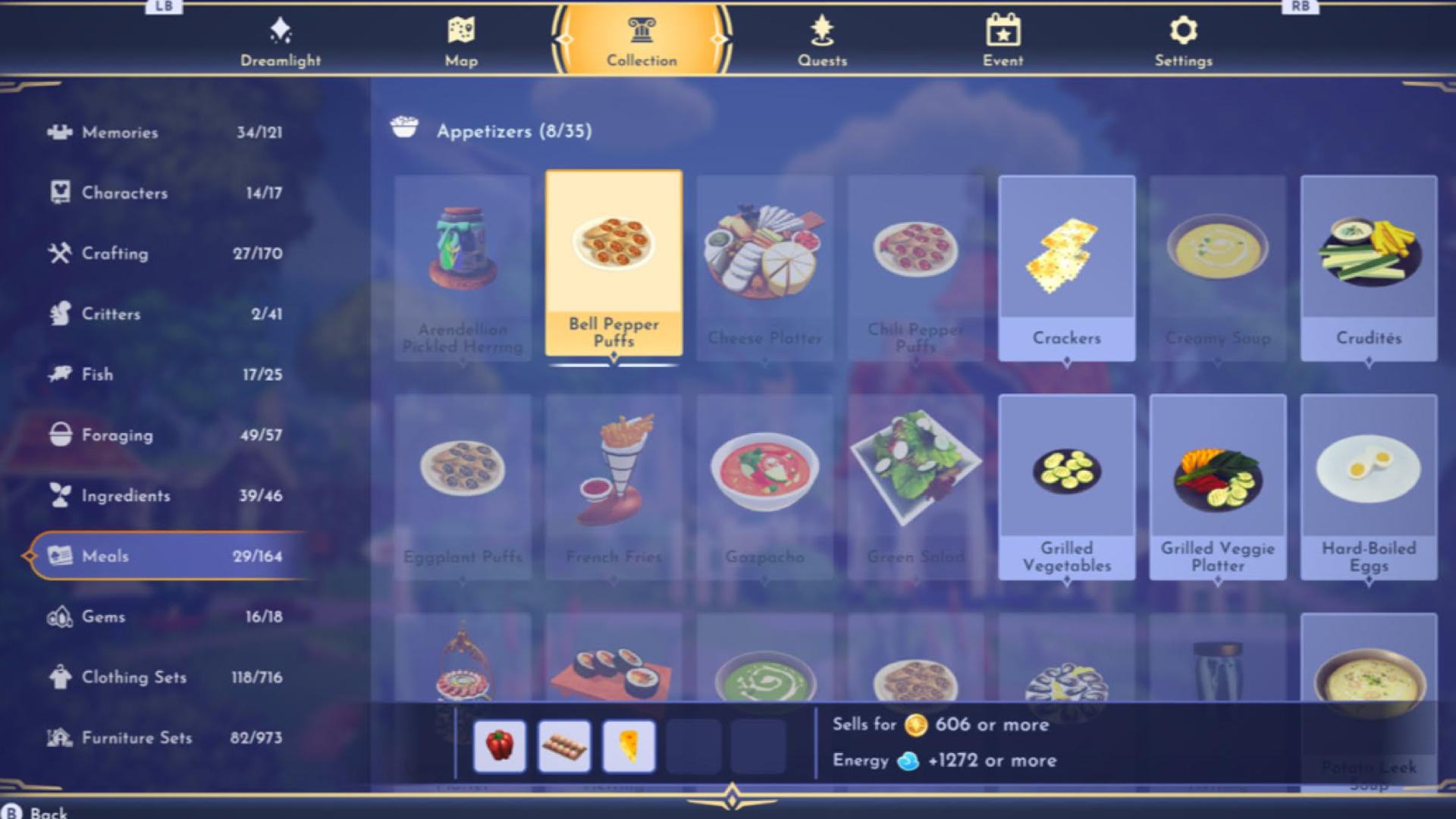