JS Print Group moved into the Lincoln Park neighborhood about five years ago. The business then outgrew the location at 1927 W. Superior St. and moved this summer to a larger facility in the Central Hillside.
(Photos by Mark Nicklawske)

A fast-growing print shop has moved out of Lincoln Park for a bigger building and plans are in the works for two new businesses — including an Indonesian restaurant — to take over the prime Superior Street location.

JS Print Group purchased the former Udac building and three adjacent properties at 500 E. 10th St. for $885,000 in April, according to St. Louis County property records. The company renovated the 16,000-square-foot facility and relocated to the new Central Hillside location this summer. The vacated Lincoln Park space at 1927 Superior St. is being remodeled and will house two new tenants: Bali Asian Cuisine restaurant and The Spice and tea Exchange.

JS Print Group owner Tobbi Stager said he opened the shop in Lincoln Park about five years ago and quickly outgrew the 5,000-square-foot space. “We’re really fortunate. It’s been a good ride,” he said. “We’re having a good year, up 41-percent for this year and so that’s big growth.” The company has added multiple new machines and expanded its print offerings to compete with Twin Cities shops in an effort to keep work in the Duluth area. A big part of its success has been through label printing — mostly label work for Duluth craft breweries.

“The local breweries call us and they need it like today or tomorrow. They’re on a timeline too. If they’ve got a beer, they’re ready to start making it,” he said. “It’s been a very good relationship with a lot of local brewers. We’re very lucky.”

Stager has been in the print business for 32 years and branched off on his own nine years ago, starting JS Print Group in his house. Work with Frost River, Aerostich and Duluth Grill drew him to Lincoln Park. The neighborhood was affordable and on the rise when Stager purchased and rehabilitated the building. He also bought and rehabilitated an adjacent property in 2019 which now houses the DLH Clothing and Free Air Life shops on 20th Avenue West.

JS Print Group now employs 15 people and will take up about 60 percent of the former Udac building. Stager plans to lease the remainder of the space, with a possible tenant being a local exercise studio. According to St. Louis County records, the former Udac Building was constructed as a grocery store in 1958. The building housed the National Tea Food Store and Boston Shoes before Udac, an educational and leadership program for the disabled, took over the space in the 1970s. Using a $3 million gift from Joseph and Nancy Bullyan, Udac purchased and moved into the former Duluth Business University building at 4724 Mike Colalillo Drive in 2018. The Central Hillside property has sat vacant for close to four years.

“Central Hillside has a lot of opportunity and growth potential, I mean there’s tons and tons of it,” said Stager. “Just cleaning up our corner is really important.”

Stager said he expects the JS Print Group move to be complete this month. Remodeling of the Lincoln Park property has already started and the address will have two new tenants.

Nevi Mariadi said she plans to open an Indonesian restaurant called Bali Asian Cuisine on the corner of Superior Street and 20th Avenue West. “I’m from Indonesia so it will be authentic recipes from my family,” she said. “It’s Balinese food and, as well, we will have sushi, curry, rice bowls, so it will be more like Asian fusion.”

Mariadi has operated a Chinese-style restaurant with her sister in Basalt, Colo. — a small mountain town near the ski resorts of Aspen. A visit to Duluth reminded her of the mountains and she decided to open her own restaurant in Lincoln Park. Bali Asian Cuisine will be a fine-dining experience with an expansive menu, cocktails and music on the weekends. An early 2023 opening is planned.

“I think Duluth needs more flavor,” she said. “I think I have that to bring to the table. I think it will be a great addition.” 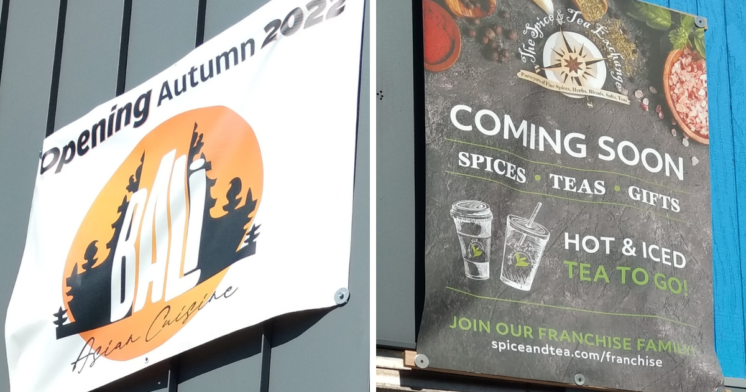 Left: Bali Asian Cuisine plans to open on the corner of Superior Street and 20th Avenue West in Lincoln Park in early 2023. Right: Lincoln Park will be home to the first Spice and Tea Exchange retail store in Minnesota.

Dennis Thielke, a cancer survivor, said the store will focus on healthy drinks and an improved kitchen cooking experience.

“We’ll have a whole line of wellness teas — they don’t cure cancer but cancer doesn’t like the green tea leaf. You know, after I got through my cancer treatment I really, really looked at that,” said Thielke. “So we’ll really market wellness and that aspect of it.”

The shop will offer a wide variety of whole teas and proprietary blends and feature to-go drinks for shoppers. The spice section is designed to improve work in the kitchen.

“The ‘shared sensory explosion’ is kind of the tagline of the franchise,” said Thielke. “There’s hundreds of spice blends that we blend in the store that turn an average cook into a lot better cook — chef’s quality.” Olive oils, vinegars, kitchen accessories and cooking classes will also be available.

The Tea and Spice Exchange is expected to open this month, Thielke said. “It will add a lot of interesting dimension to the neighborhood,” he said.

Stager agrees. He said the two new businesses will draw new people to Lincoln Park and keep regulars coming back.

“The biggest thing about Lincoln Park is that it needs diversity,” he said. “It needs that to develop. Go to the Cities, go to New York, go to Chicago, you have all these places where they’ve got high-density populations. They have a lot of diversity. you need that. You can’t have the same flavor of ice cream every time.”